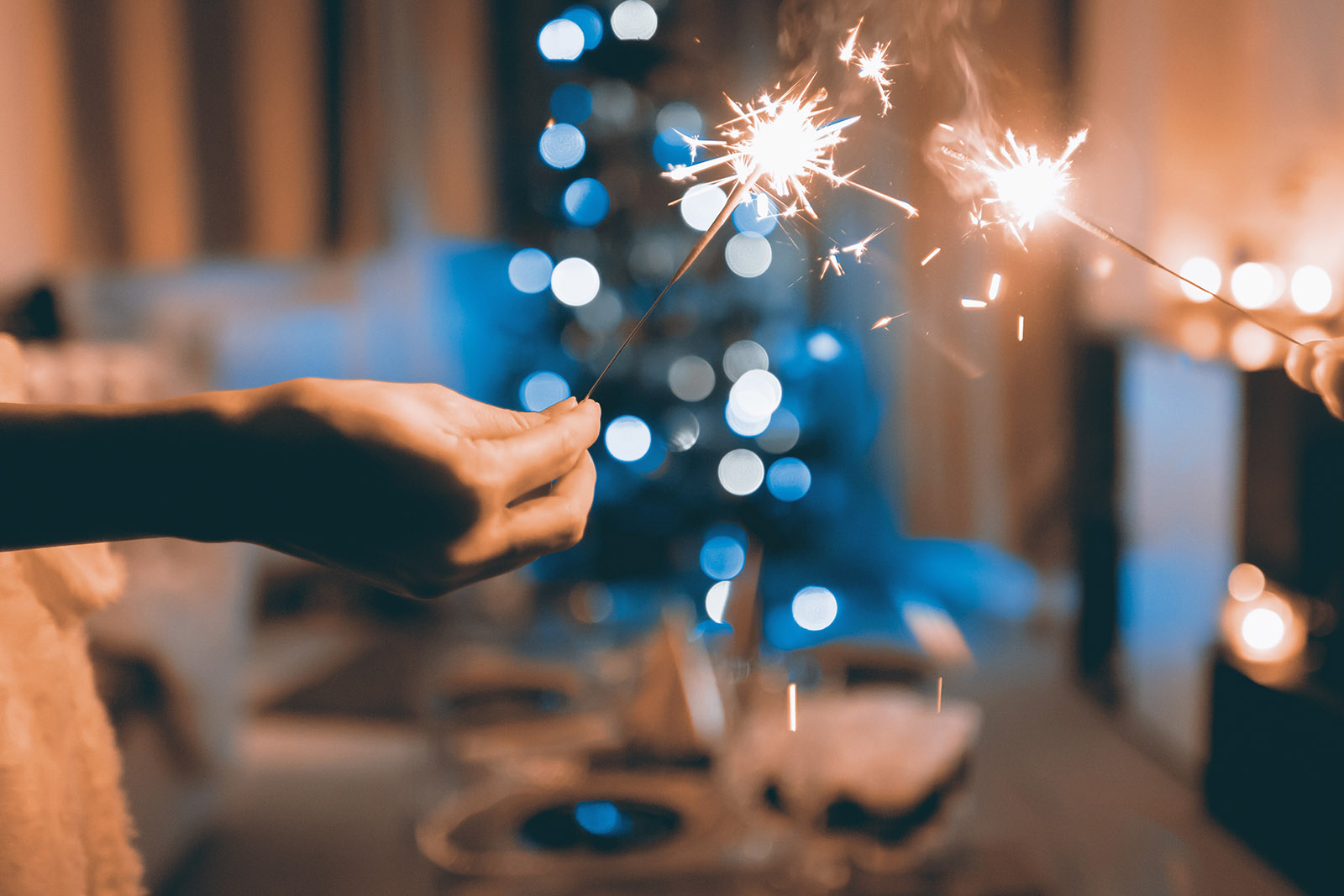 There’s no event in the United States quite like Independence Day, casually known as the Fourth of July. There’s no shortage of patriotic holidays in the United States, but there’s something special about Independence Day that makes it an all-American classic. Whereas most other patriotic holidays in the US are focused around military service, like Memorial Day at the end of May or Veteran’s Day at the beginning of September, Independence Day is celebrated by and in honor of America—and therefore Americans—itself. Marked as the day we claimed independence as a country from England, the day holds a massive amount of significance in the United States for many Americans, both as a day to celebrate the history of our country and the accomplishments we’ve made along the way.

Independence Day features a ton of activities and things to do, from barbecues by the poolside to fireworks displays at night. There are parades, parties, and not to mention wide-reaching holidays that almost everyone gets off. In some ways, the Fourth of July reminds us once more of holidays like Memorial Day or Labor Day, but with even more celebration. Even if this year’s celebration feels smaller than last year, there’s no reason to give up all of your plans just to stay inside. So, whether you’re watching the fireworks online or having a pool party with a few close friends, you’ll still need some captions for Instagram. 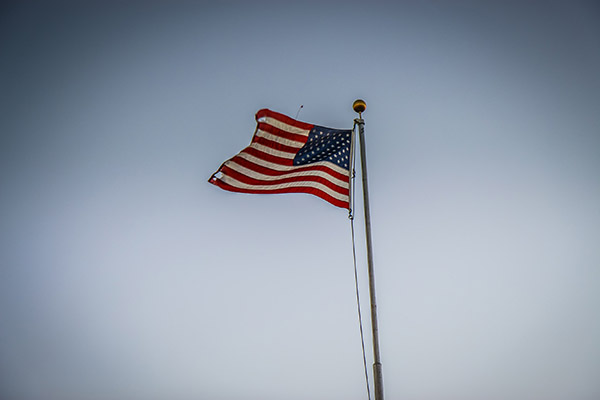 As you might imagine, a holiday with as much history as Independence Day—244 years of history!—means there’s plenty of surrounding quotes around the day that make it easy to quote your favorite photos. From American leaders to American poets. writers to military members, there are plenty of options for anyone looking for some quotes for their photos on Instagram, and you can view them all below. 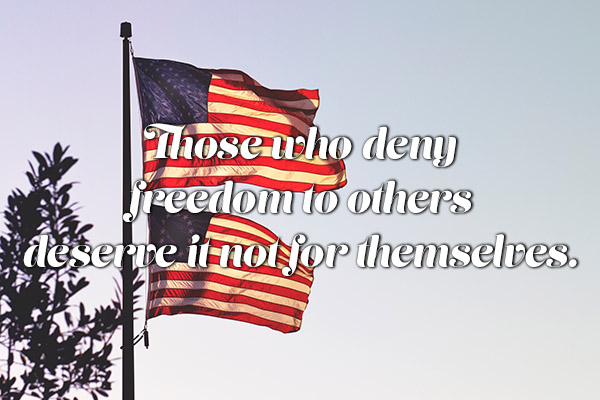 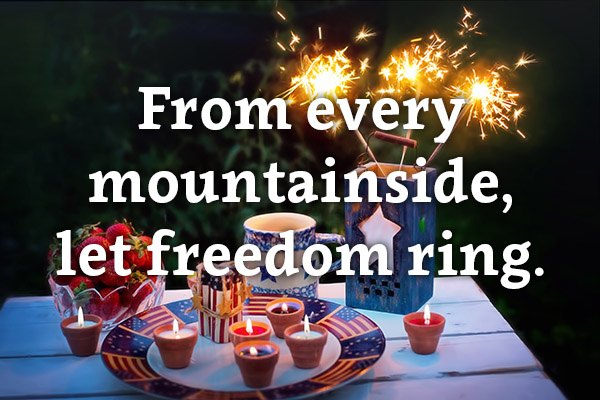 Maybe you’re looking for something with some serious patriotism for your photos of flags, sparklers, and burgers, but you want something without all the historical accuracy you get from the quotes above. There’s no shortage of unattributed patriotic quotes to choose from, without having to actually quote a once-leaving leader of the United States. Check out our patriotic phrases below! 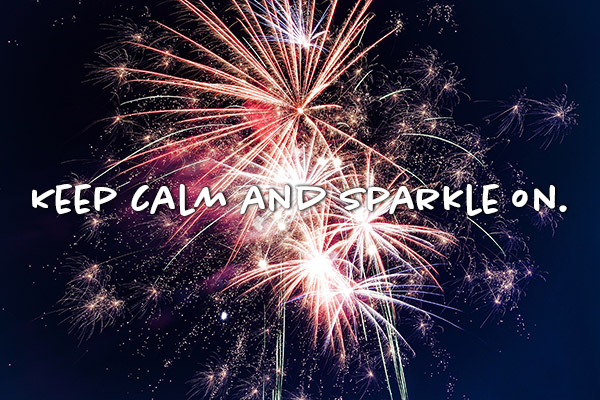 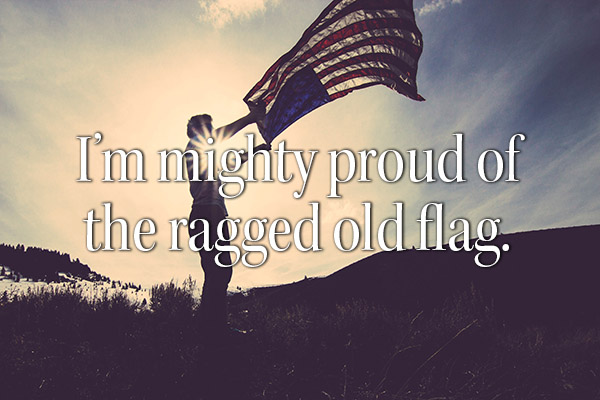 Independence Day has so much food involved, from burgers to chips, hot dogs to cold drinks, and ice cream cones dripping down your hand, that it’s nigh-impossible for the foodies out there to not attribute some quotes to their photos of food. If you’re taking photos of your perfected burger—we recommend a fried egg with some bacon and avocado—you’ll need some cookout captions for your photos of your delicious eats. Luckily, we have plenty for you below. 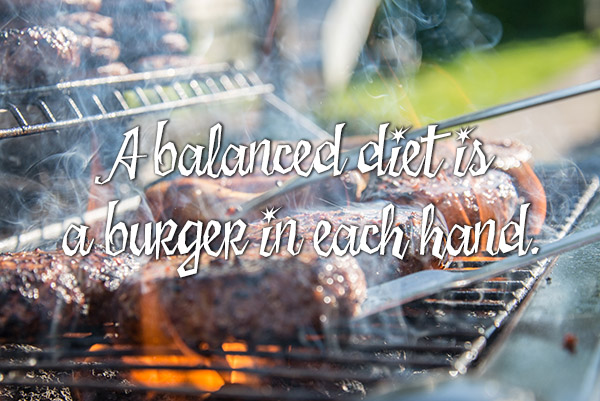 Summer’s been going strong since the Fourth of July, but around most of the United States, we’ve been having our first big heat wave in a couple months. Independence Day does a good job in representing a milestone in the summer, when the days are at their longest and the sun is at its hottest. Almost every activity surrounding the Fourth of July comes down to something you can do in the heat of summer, so it’s a good time to snap some photos of the pool, the water park, the beach, or anything else summer related. And to go with those photos, here are some excellent captions. 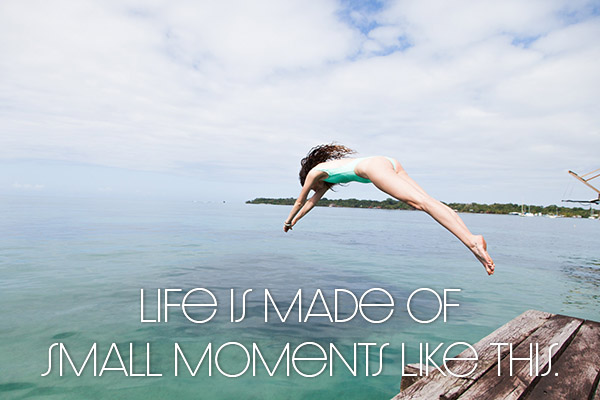 Capturing a great photo of a series of Fireworks isn’t easy; you need perfect precision and a good eye to snap photos of those explosions in the sky—not to mention a really fast lens. That said, it’s totally possible with modern lenses, thanks to the speed and accuracy of the photos. Live Photos on the iPhone and Motion Photos on Android help to take small video clips while also capturing a photo, which means a moment can always become alive whenever you’re ready to view it. And using the manual settings on your camera can help you crank up the speed of your lens, so long as your hands are steady enough to grab a photo that isn’t blurry.

Once you have the perfect snap of your fireworks, here are some ideal captions to tag along with it. We promise we only used one Katy Perry lyric. 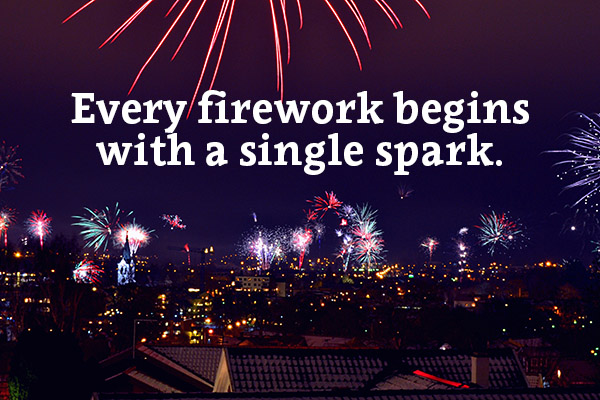 Independence Day is truly a special holiday for those in the United States. It’s a massive party, one where we celebrate the pride we have in where we live, and the joys of helping to build a tried and true democracy. It’s not a perfect country, and it never will be, but there’s something to be said about celebrating the anniversary of when we stopped being under the rule of someone else and finally entered under rule of ourselves. These captions help to catch and capture the spirit of the holiday, celebrating and honoring both the country itself, the pride and joy we have in our accomplishments, and remembering the mistakes we’ve made along the way. So, caption your photos and let us know in the comments what captions were your favorites of the bunch! 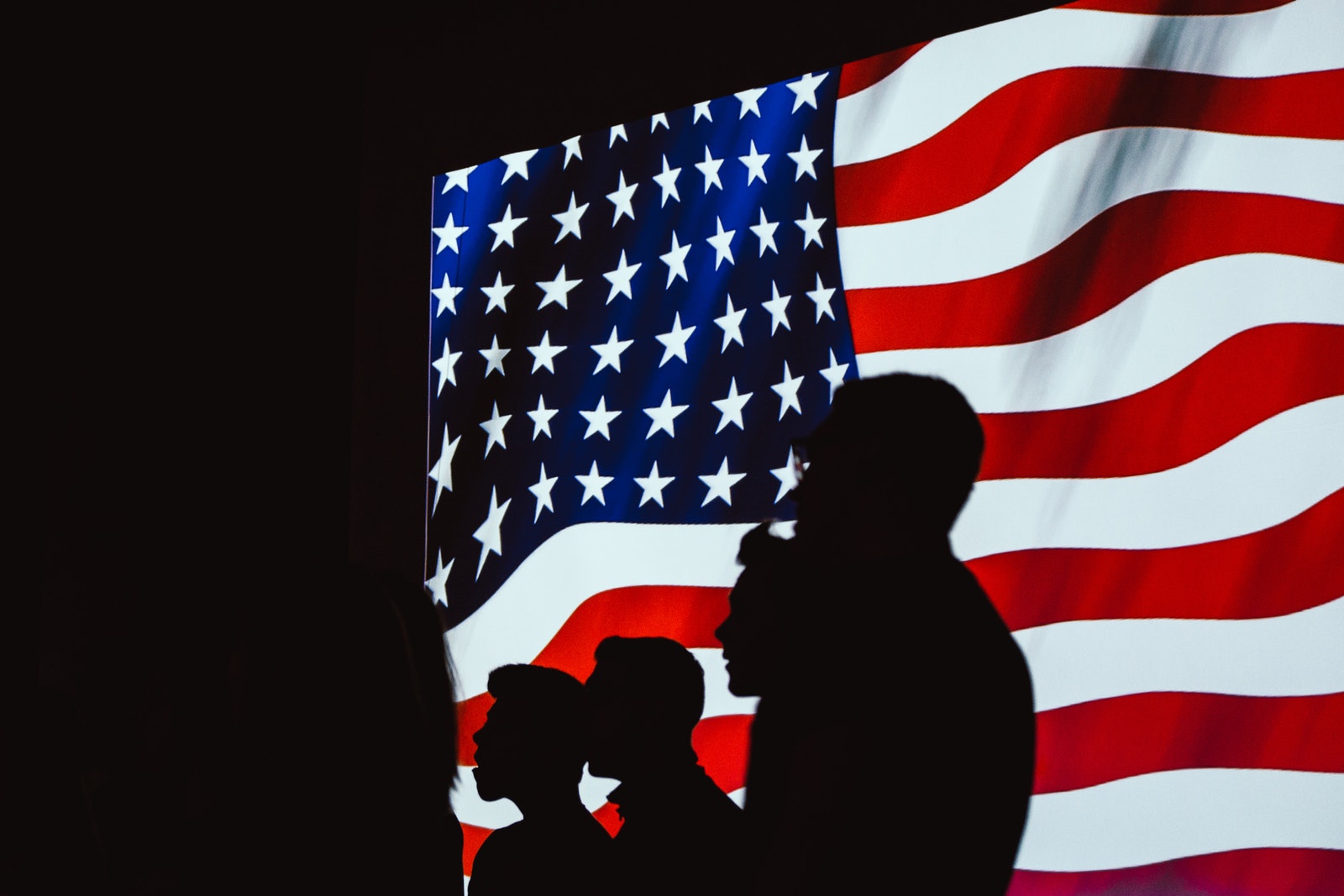 When it comes to holidays, there’s almost always a special meaning behind them to consider when celebrating. On Independence Day, we consider our forefathers’ fight for freedom and how that fight continues today. Thanksgiving, which began as a harvest festival, allows us to consider what’s important in our life, including those friends and family who surround us and fill our hearts with love. And Memorial Day, observed annually on the last Monday in May, celebrates the lives and the memory of those who died while serving in the United States Armed Forces. The holiday is often considered the unofficial beginning of summer, with many given a full three-day holiday on which to gather with friends, arrange memorials for friends and family whom they have lost, and above all, honor the sacrifice given by American troops in battle. 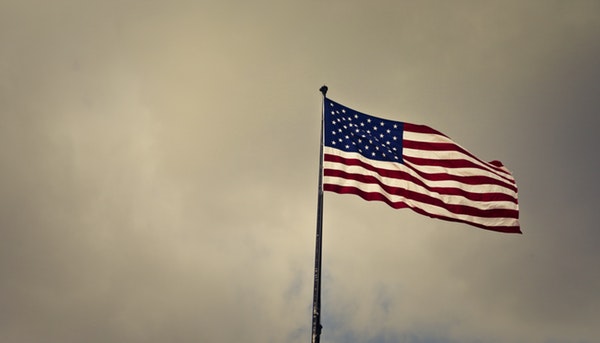 Despite current events, Memorial Day celebrations will still be held around the country. No matter what your plans for this weekend entail, you’ll want to make sure you take photos to mark the occasion. Memorial Day is a great photo opportunity, especially if you just got a new phone with an exceptional camera. Whether you’re shooting with a phone or a dedicated DSLR, you’re bound to take some amazing photos this weekend.

Instagram has become the go-to place to share photos, making it easy to link from Instagram to Facebook or Twitter. With a large audience, Instagram Story features, and the ability to add captions, Instagram is one of the best ways to make sure your photos stay collected in one place. If you’re looking for the right caption for your photo, you’ve come to the right place. Here are some great captions anyone can add to their Instagram photos or Instagram Story for Memorial Day.

Perhaps more than any other holiday, Memorial Day is the perfect time to break out some famous quotes to remember your fallen friends, family members, and others who have served in the past. Quotes from past presidents, ex-military personnel, and other famous leaders allow us to consider the sacrifice of the men and women who have helped to keep our country safe, secure, and free. Using any of these famous quotes allows you to capture the solemn feelings of the holiday, giving your photo a serious, respectful atmosphere. These are some perfect quotes for your Memorial Day photos. 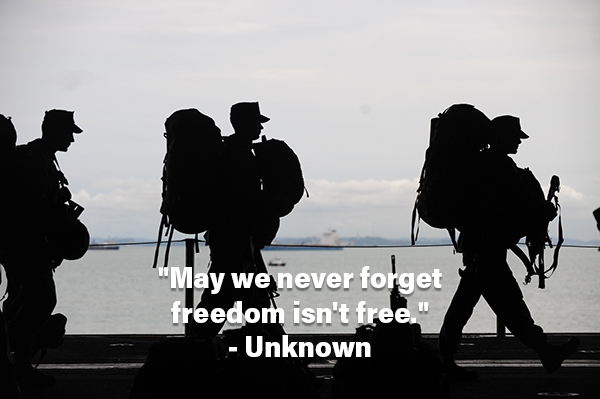 At its core, Memorial Day is just one of the three major holidays in the United States that celebrate service, freedom, and the call to duty, with the other two following throughout the summer. If you’re looking to mark your photos with a sense of patriotism without using a direct quote from someone who served in the military or the government, here are some excellent captions to help boost your photos’ appeal. 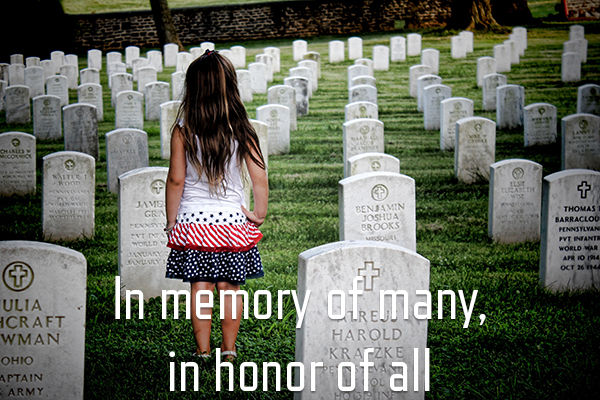 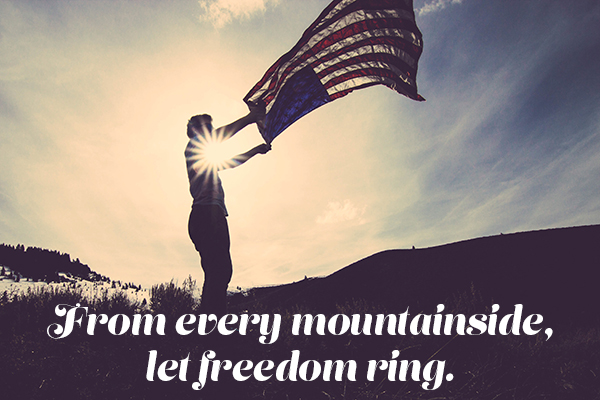 After you arrive home from your town’s local parade or the ceremony at a nearby cemetery, you might play host or be invited to a cookout with friends and family. Memorial Day marks the beginning of summer for many, with Labor Day in September often marking the winding down of America’s favorite (or at least, warmest) season. Whether you’re grilling hamburgers by the pool, watching baseball with your dad, or just hanging out with your significant other, Memorial Day marks the first time of the year you can throw on some sandals, crack open a cold drink, and hang out under the sun. Here are some perfect captions for marking the beginning of summer. 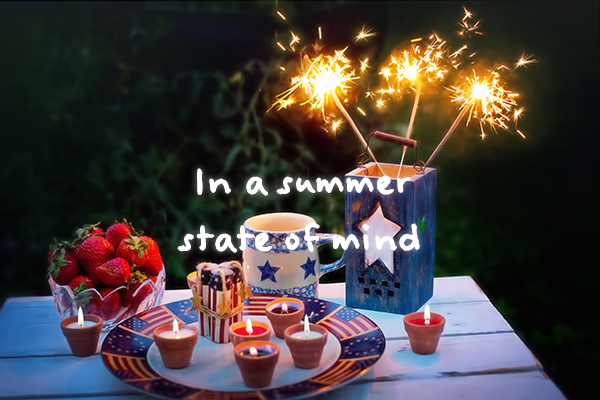 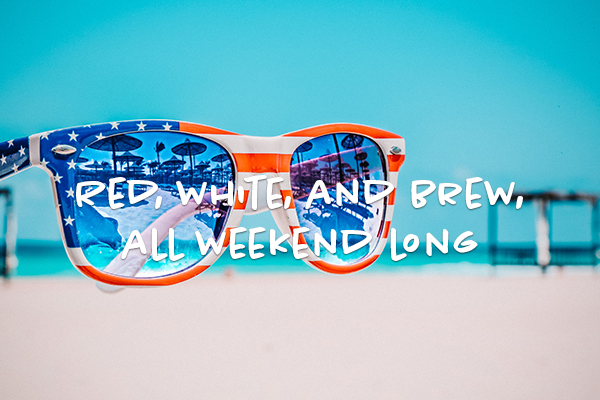 Memorial Day isn’t just the kickoff to summer. It’s also a time to remember those in your life who have served and paid the ultimate price. Some of us have a family member—an aunt or an uncle, a grandparent, or perhaps even our own parents—who joined the Armed Forces, only to fall while serving. Some of us have friends whose family members were lost in the act of duty.

In some way, the chances are high that you or someone in your life has been changed by the sacrifice paid by someone else. These captions help to catch the spirit of the weekend, celebrating and honoring the lives of those who have given everything while simultaneously enjoying the long weekend that marks the holiday. Let us know in the comments what captions you loved!